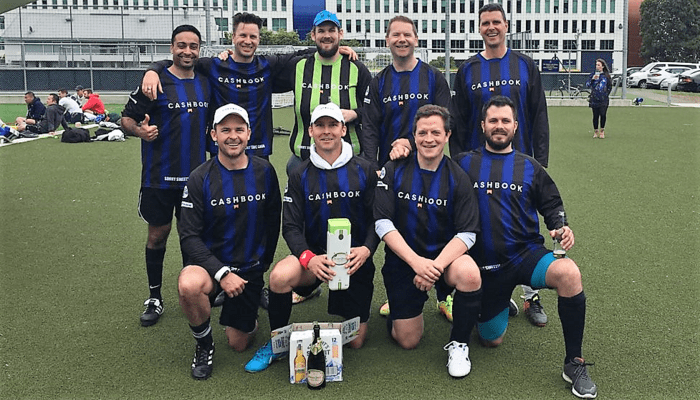 The Cashbook team basking in the glory of victory after their nail-biting penalty shoot-out in the Soccer 7’s tournament.

New Zealand may not be going to the World Cup in Russia next year, but that did not hinder these dedicated players from winning the regional Soccer Seven’s tournament. The Cashbook sponsored team were victorious in the regional Soccer Seven’s tournament in Auckland, New Zealand. The organization and skills shown throughout the tournament by the team were a sight to behold. Playing with a tough Italian style defence, combined with an attack that resembled the great Brazilian teams of old. The Cashbook sponsored team managed to reach the final, where they won by way of a penalty shoot-out. Nerves were on edge for the shoot-out, the team showed their resilience and coolness under pressure which got them the victory. Well done to all involved from everyone here at Cashbook. We hope you enjoyed the celebrations and we look forward to you defending the trophy in 2018.

Applying Cash: Essential facts and why it’s so important